Last weekend, the creative team at Christian Life Center (CLC) did an amazing variation of The Greatest Showman. WOW! If you missed it, then you MUST see it now at clcdayton.com.

KEEP WATCHING because The Greatest Showman performance was followed by one of the best, funniest Father’s Day songs ever written by CLC worship leaders Zach Nelson and David Demuth plus CLC Kids. 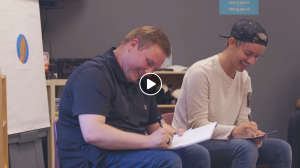 Earlier this week, I was at the CLC monthly board breakfast, and one of our young dads said “Father’s Day was such a fun service!” Though we all initially agreed, we later realized “fun” only described the creative pieces like the CLC live performances of The Greatest Showman and “Father, Father, Father” song.

On the contrary, the sermon was not what any of us would call “fun.” We all agreed that different words described the sermon.

One word to describe the sermon was “sobering.” The sermon this Father’s Day began with the typical “Star Wars” introduction (think yellow scrolling text to a momentous underscore). Then, it was followed by a public reading of Revelation 20:4-6 by Darth Vader (James Earl Jones). It was a creative way to introduce one of the most sobering truths of scripture: A 7-year period is coming that Jesus called “The Great Tribulation.”

Even more sobering, the message addressed some contemporary happenings that would suggest The Great Tribulation is not too far off. Watch the sermon for the clip about China’s social credit system.

Another word one of our board members suggested would fit the sermon was “appropriate.” Dads need to take seriously their responsibility to lead their families to know and serve Jesus Christ. If it takes James Earl Jones and hard hitting everyday news to get us “un-distracted,” then we agreed the sermon was worth it and an appropriate use of creativity and current events.

Here’s the truth spelled out clearly: Jesus promised He would return for His followers some day. That knowledge is meant to motivate us to maintain our passion for God and His Word.

To dads (and moms) reading this post: please love and lead your families like you are expecting Jesus and what He promised!

Looking ahead, I am very excited for this coming weekend! I really hope you can join us this Saturday or Sunday at CLC for “Last Wars Episode III: Millennium Reign.”

Organizational and community leader with a passion to help others, whether it be personally or professionally through life-lessons, reflections, and practical advice. View all posts by Dr. Stan Tharp, MBA, MA, D.Min.